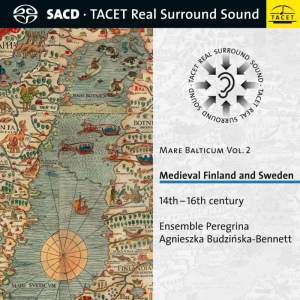 The first recording in the 4-part series “Mare Balticum”, medieval music from Denmark, received the ICMA (International Classical Music Award). Agnieszka Budzinska-Bennett and Ensemble Peregrina have created a series incapsulating astonishing and persuasive ideas. Budzinska-Bennett digs out works where others do not even know what to dig for and makes them playable. The works on this album are a feast for the ears.

The series provides an insight into the local literature and musical repertories of medieval Denmark, Sweden, Finland, Germany, and Poland; both Latin and the vernacular are represented, as well as the diversity of historical musical instruments used in those regions at the time.

The project aims to show something of the strong political and cultural connections between these medieval countries, their development over time, and the similarities between them, all of which are essential to our understanding of the common identity and history of Balticum, as is reflected to us through its centuries of music.

Ensemble Peregrina is one of the leading ensembles dedicated to the performance of early medieval vocal music. The core of the ensemble comprises Agnieszka Budzinska-Bennett, Kelly Landerkin, Lorenza Donadini, Hanna Jarvelainen and Baptiste Romain, often joined by other excellent musicians such as Benjamin Bagby.