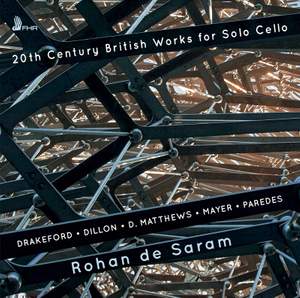 Rohan de Saram releases an album featuring the premiere recordings of works whch were both written for and premiered by the virtuoso cellist.

Showcasing works by Richard Drakeford, Hilda Paredes, David Matthews and, the collection follows on from an earlier release [FHR49] and is devoted to works that were written for and were premiered by Rohan de Saram, his championing of new and unfamiliar music having been a hallmark of a career which now stretches back across six decades. A repertoire that is as extensive as it is varied in overall range, encompassing as this does many of those stylistic traits that have emerged during the post-war era and which here eschew the mutual exclusiveness that has too often proved an obstacle to the reception of contemporary music. A vindication, if such were necessary, of Rohan de Saram’s advocacy.

Rohan de Saram is one of the leading cellists of the last 50 years, particularly in the field of contemporary music. At the age of eleven, he studied with Gaspar Cassad and at the age of 16, he was given the Suggia Award which enabled him to study with Pablo Casals and with John Barbirolli in London. Casals said of him: ‘There are few of his generation that have such gifts.’ In ensemble or as a soloist, he has premiered works by many leading composers including Berio, Britten, Cage, Glass, Hindemith, Kagel Xenakis etc. His discography is vast, ranging from solo, chamber, concerto from baroque to contemporary. For many years, de Saram was the cellist with the renowned

Arditti Quartet, who made many recordings and won prizes including the Siemens prize for their services to music and a Grammy Award for their recording of works by Elliott Carter.