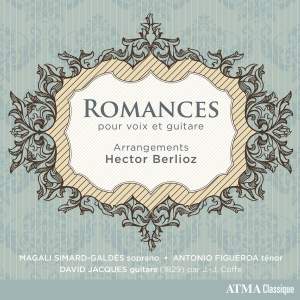 No. 9, Romance de Bédard (After Bédard)

No. 13, Objet charmant (After Anonymous)

No. 24, Le sentiment d’amour (After Messonier)

No. 21, Faut l’oublier (After Anonymous)

No. 7, Romance de "Felicie" (After Caltrufo)

To mark the 150th anniversary of the death of Hector Berlioz, ATMA Classique and Festival Classica present the first complete recording of the composer’s arrangements of romances for voice and guitar featuring soprano Magali Simard-Galdès and tenor Antonio Figueroa, accompanied by David Jacques, who plays an 1829 Jean-Joseph Coffe guitar.

Selected from The Receuil de Romances avec Accompagnement de Guitare, most of these pieces are arrangements of popular tunes from the comic operas that were all the rage in Paris in Berlioz’s time.

The young Québécoise soprano Magali Simard-Galdès has been acclaimed for her crystalline timbre, great musicality, and magnetic stage personality. Recent debuts include the role of Sophie in Werther for Opéra de Québec, and Louisette in Bonsoir voisin by Ferdinand Poise at Opera Lafayette. She also returned to the Opéra de Montréal to sing Frasquita in Carmen and gave a recital at the Société d’art vocal de Montréal.

tional Vocal Arts Institute’s Silverman Prize for his performance as Belmonte. His acclaimed debut in the role of Nadir (Les Pêcheurs de perles) at the Opéra d’Avignon lead to prestigious invitations from the Opéra Comique, the Philharmonie de Paris, the Capitole de Toulouse, and the Theater an der Wien. Figueroa’s career has taken off across Canada too, thanks to performances with Pacific Opera and with the opera companies of Québec City, Montreal, and Ottawa.

Guitarist and lutenist David Jacques has a Ph.D. in early music performance from the Université de Montréal. He studied classical guitar at the Cégep de Sainte-Foy, Université Laval, and the Conservatoire de musique de Québec. His discography consists of 50-plus recordings on the XXI-21, ATMA, Oz, and Analekta labels, several of which have been nominated for ADISQ, JUNO, Opus, and ÉCHO Classik prizes. Jacques has been awarded Opus Prizes for three of his discs: Pièces de guitarre de Mr Rémy Médard (2008), Tango Boréal (2012), and Pampa Blues (2014).