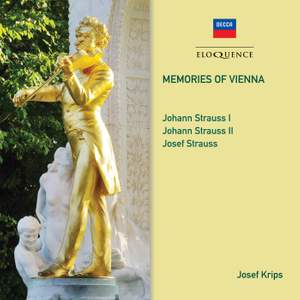 Krips has the lilting rhythms of the Viennese waltz coursing through his veins in these elegant performances. Coloratura soprano Hilde Gueden’s cameo appearance is a welcome bonus. — BBC Music Magazine, February 2020, 3 out of 5 stars

Strauss waltzes and polkas in classic Decca 1950s recordings, led to the manner born by the Viennese conductor Josef Krips.

Newly remastered from the original tapes – and in the case of two works the shellac discs – this compilation presents recordings made in London and Vienna by a conductor born and bred to the rhythms of the Strauss family. Josef Krips cut his teeth as a repetiteur at the Volksoper in Vienna, making his debut there in 1921, before graduating to the more prestigious Staatsoper in 1933.

Mozart was forever Krips’s musical god: ‘My maxim is that everything has to sound as though it were by Mozart, or it will be a bad performance. When you perform Mozart, everything has to be crystal clear, everything has to be in balance and everything has to have a relaxed sound.’ These are the qualities that mark out his conducting of these waltzes and polkas, which he continued to conduct wherever his career took him: to London in the late 1940s, becoming principal conductor of the LSO for three years in the early 50s, and thence to the US, such as a late-in-life post as musical director of the Buffalo Philharmonic, returning often however, to his spiritual home of Vienna.

The recordings here were made first of all with the ‘New’ Symphony Orchestra of London musicians in April 1948, then with the LSO in April 1950. The legendary Decca producer John Culshaw was behind the glass at the Sofiensaal for Vienna Philharmonic sessions in October 1956 and September 1957 that yielded the ‘Memories of Vienna’ LP which gives this album its title. He was joined by the soprano Hilde Gueden for the obbligato soprano parts in waltzes such as Voices of Spring; Gueden had been one of the most prominent members of the Vienna State Opera immediately after the war while Krips rebuilt and nurtured it from the ground up, and she too was blessed with an instinctive understanding of Viennese style as well as the kind of light lyric soprano voice that made her ideal for Josef

‘Played with poetic feeling, affection and with meticulous attention to detail… I was charmed and amused in the Perpetuum mobile by Krips’s spoken ‘And so on!’ Gramophone, January 1949 (New SO recordings)

‘Here are four of the loveliest Strauss waltzes played with warm affection and lovely tone.’ Gramophone, December 1959 (‘Memories of Vienna’)

‘Krips’s performances with their gentle rhythmic emphasis are attractively affectionate… The waltzes have spirit, and the Pizzicato Polka comes off especially well. This dates from the earliest days of stereo, but the acoustic is warm and the sound is surprisingly good.’ Penguin Guide, 1982 (‘Memories of Vienna’)

Krips has the lilting rhythms of the Viennese waltz coursing through his veins in these elegant performances. Coloratura soprano Hilde Gueden’s cameo appearance is a welcome bonus.