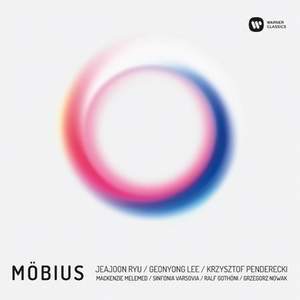 “Separated by 7,800 kilometres, connected by culture” – this is the motto of 2019, a year full of anniversaries. It is the 30th anniversary of establishing diplomatic relations between Poland and South Korea. And Sinfonia Varsovia Orchestra is also celebrating its 35th anniversary. For this occasion, we proudly present the Möbius album, containing works by Penderecki, Lee and Ryu, performed by piano virtuoso Mackenzie Melemed (1-3), and Sinfonia Varsovia directed by Ralf Gothoni (1-4) and Grzegorz Nowak (5).

The Möbius loop has become a symbol of the intercontinental and intergenerational flow of musical thought. Its beginning, or rather point of contact, is marked by the figure of Krzysztof Penderecki, the artistic director of Sinfonia Varsovia and the most important Polish composer of the 20th century. Penderecki’s works have had a huge influence on the shape of modern musical culture, in Europe and beyond. His pieces remain an inspiration for artists all around the world, as evidenced by the music of South Korean composer Jeajoon Ryu, a student of Penderecki’s. This circle of music is completed by Geonyong Lee, who combines the European idiom drawn from his studies in Germany with the influence of South Korean culture he was raised in.