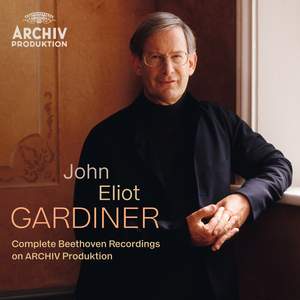 · Includes a bonus disc with an interview with Gardiner discussing the symphonies (in English, German and French)

The great French conductor François-Antoine Habeneck and his Orchestre de la Société des Concerts du Conservatoire pioneered accurate and responsible Beethoven interpretation in the 1830s and set the standard for later period-informed performances. Like Habeneck, John Eliot Gardiner was merciless in rehearsal and scrupulously faithful to the original manuscript. By the time he embarked on his own Beethoven adventure with his newly-founded Orchestre Révolutionnaire et Romantique, he had long established a reputation for himself with historically informed performances – having founded the Monteverdi Choir in 1964 and in 1978 the English Baroque Soloists. In 1989, the Missa Solemnis on ARCHIV was to reveal “Gardiner’s Beethoven credentials” and the Mass in C Minor was to reaffirm his “genius” (Gramophone).

Gardiner assures us that the use of period instruments allows the revolutionary side of Beethoven to come to the fore with distinct clarity, and has “an entirely distinctive sound which can convey the train of Beethoven’s thought more readily and more directly.” A logical consequence of this is that his soloist for the five piano concertos, Robert Levin, decided against a concert grand and chose to perform on a fortepiano. Gardiner, who was convinced that the modern symphony orchestra could no longer be the tonal ideal for the music of Beethoven tells us that. “It was about cleaning the musical lens and stripping out the excesses of the late 19th century.” Thus, in the symphonies, the listener is taken aback at the revolutionary force of Beethoven’s language and reminded once again of the ferocious intensity that must have shell-shocked 19th-century Viennese audiences.

“. . . [Gardiner] has a team of soloists without weaknesses, and, it must be added, his own genius for making all things new . . . It is indeed an outstanding recording in every respect . . . [the exhilarating effect of Gardiner's approach is] felt most magically of all in the "Et vitam venturi" fugues. Each of the soloists contributes fine work, and they are an entirely homogeneous quartet . . . [the soloists] trailblaze a kind of joyful liberation from the limitations of choral music that carries the choir in its wake . . . I can't think of a more unaffectedly affecting "Benedictus" on disc.”

“Both orchestra and conductor seem to be engaged on an exciting voyage of rediscovery, as if they are intent on restoring the vibrant colours of an age-old masterpiece. The result is compelling, as fervent rhythms, accented sforzandos and stark contrasts in dynamics and articulation bring volcanic energy to the orchestration and a rawness that makes evident the revolutionary daring of Beethoven's musical expression’”

-- BBC Music Magazine on the 9 Symphonies