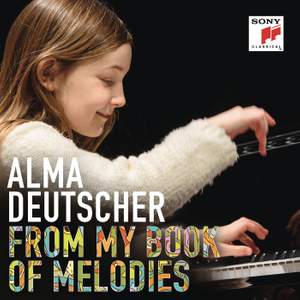 Alma Deutscher - My Book of Melodies

Deutscher: For Antonia (Variations on a Melody in G Major)

Deutscher: Summer in Mondsee (Allegretto in A Major)

Deutscher: Up in the Sky (From Cinderella)

Deutscher: When the Day Falls into Darkness (From Cinderella)

Deutscher: The Star of Hope (From Cinderella)

Deutscher: I Think of You

Internationally renowned, British prodigy, Alma Deutscher returns with her sensational new album From My Book of Melodies. From My Book of Melodies comprises of melodies Deutscher has composed from the ages of 4 and 14 performed on the piano. Born in 2005, Deutscher is an incredibly gifted composer, violinist and pianist who has received critical and international acclaim for her compositions. She is often compared to many great composers including Mozart and Beethoven. Deutscher composed her first piano sonata at 6. This was followed by a short opera, called The Sweeper of Dreams, composed a year later. She has since written various works for piano, violin and chamber ensembles. Included in this album are melodies from Deutscher’s critically acclaimed opera titled Cinderella. Cinderella was written between the ages of 8 and 12. It has been performed in Austria, USA and Israel.