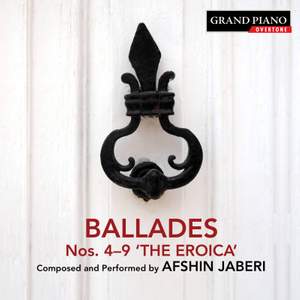 Ballade No. 6, 'Exile to Ottoman Empire'

Ballade No. 7, 'The Most Great Prison'

Ballade No. 8, 'The Ascension'

Ballade No. 9, 'Center of the Covenant'

This album completes Afshin Jaberi’s powerful cycle of Ballades. The nine pieces together take the title The Eroica and offer a stylistic synthesis of Eastern melody and Western classical harmonic and structural traditions. Strongly influenced by the Iranian composer’s Baha’i faith, the Ballades’ narratives are focused on tracing the early years of one of the world’s youngest religions, one dedicated to peaceful unity and the betterment of humanity. Afshin Jaberi is an Iranian pianist and composer, who was born in the Kingdom of Bahrain and brought up in Qatar. Although he demonstrated a facility for both performance and composition as a child, he did not receive any formal musical training until 1991, when he undertook studies first in Debrecen in Hungary, and later in Kazakhstan. His rapid progress and pianistic study, particularly of 19th century piano works, led to a series of extended compositions for the instrument, beginning with his First Ballade in 1991.