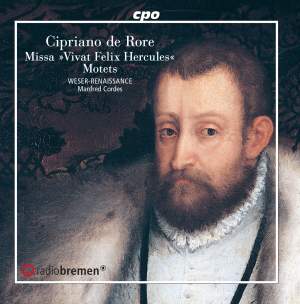 Cipriano de Rore, a native of Ronse, embodies with his music the multifacetedness and cosmopolitan influence of the Franco-Flemish epoch. His significance in music history can hardly be overestimated, and his extraordinary position between the prima practica and seconda practica makes him simultaneously a guardian of the tradition and a trailblazer of the “new music.” The Mass “Vivat felix Hercules secundus” from the genre of Masses for secular princes was probably composed by de Rore shortly after his arrival in Ferrara and is to be understood as a tribute to his employer, Ercole II d’Este, whose name de Rore honored in a remarkable manner. In each part of the Mass the tenor voice sings the text “Vivat felix Hercules secundus, dux Ferrariae quartus” (Long live the happy Ercole II, the fourth Duke of Ferrara). In addition to the text of the Ordinary, then, a second, worldly level is integrated into the Mass composition, which at the same time works toward the goal of lending the secular ruler – as a mediating instance between the sacred and secular spheres – a quasi-divine status. Along with the Mass, motets by de Rore are also heard here: works in which the composer assimilates techniques such as the canon, cantus firmus, and soggetto ostinato.