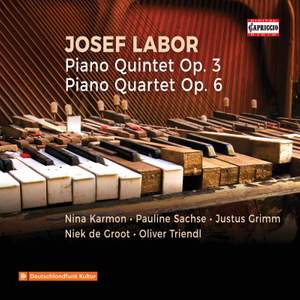 Labor’s E-Minor Piano Quintet is a magnificent work cast in a tragic mold. His C-Major Piano Quartet is magnificent too, but in a different way, its cast expansive, all-encompassing, benevolent,... — Fanfare, May/June 2020 More…

During his lifetime, Josef Labor was a pianist and organist recognized throughout Europe and a celebrity of the Viennese music scene. At the age of three, he lost his sight due to smallpox. Up to now, Josef Labor has been little researched in musicology. Labor was not an expressive musician along the lines of late Romanticism, who made his own life into the starting point of his art. Nor was he a musical innovator, nor simply a conservative. The linking principle is classicist aesthetics, setting great store by clear formal structure and balanced proportions. In this adherence to the ideals of Viennese Classicism, he shows himself to be unimpressed by the vehement conflicts of the time between New Germans and supporters of Brahms. During his lifetime and in his generation Labor was an outsider as a composer, a kind of musical solitary, who positioned himself in a very special way, independent of the spirit of the age.

Labor’s E-Minor Piano Quintet is a magnificent work cast in a tragic mold. His C-Major Piano Quartet is magnificent too, but in a different way, its cast expansive, all-encompassing, benevolent, and, in the end, joyous. I love them both, but it’s the latter, the Piano Quartet that I’d label a true masterpiece. The omnipresent—or, should I say, omnivorous—pianist, Oliver Triendl, is joined by an ensemble of outstanding musicians who pour their hearts out for Josef Labor, and, from the sound of it, their souls too. Urgently, urgently recommended.