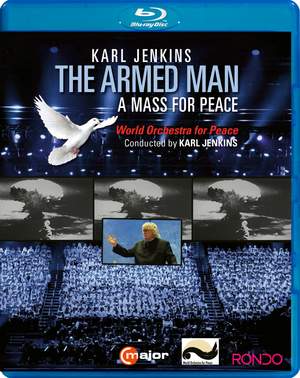 Offer, Karl Jenkins: The Armed Man - A Mass for Peace

The Armed Man: A Mass for Peace by Welsh composer Sir Karl Jenkins is the most performed work by any living composer. This performance is the largest ever staged and was uniquely performed in synchronisation with a specially commissioned war-archive film reinforcing the narrative of the work – the build up to war, war itself and the consequences of war. Projected on to five giant screens, the film delivers a poignant backdrop to the moving musical narration providing the audience with a powerful and emotional multimedia experience. In this truly unique historic occasion Sir Karl Jenkins conducts The World Orchestra for Peace and around 2,000 singers from nearly 30 countries who joined together to Sing for Peace in Berlin.