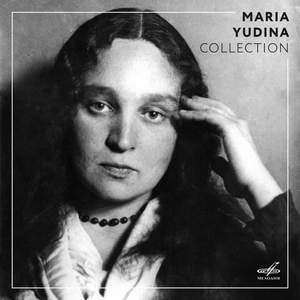 Prokofiev: Things in Themselves, Op. 45: I. Allegro moderato

“This is not at all what I wrote, but play it like this. Do play it this way!” exclaimed Dmitri Shostakovich after Yudina performed the freshly written 24 Preludes and Fugues. This exclamation contains the key to understanding of Maria Yudina’s performing art – a controversial and disputable one that left a profound imprint on the cultural environment of the twentieth century. The 10-album set is the biggest part of Maria Yudina’s surviving studio and concert recordings from the Melodiya archive made between 1948 and 1969. Her best-known interpretations (Bach’s Well-Tempered Clavier, Beethoven’s early and last sonatas, Schubert’s impromptus, Mozart’s pieces) are found here side by side with twentieth-century pianistic rarities (Glazunov’s Prelude and Fugue, Prokofiev’s Things in Themselves, Lutoslawski’s Variations on a Theme of Paganini). Her recordings of Andrei Volkonsky’s Musica Stricta, the work from which the history of Russian avant-garde music began (the composer dedicated it to Yudina), Webern’s Variations and Scriabin’s Preludes, Op. 11, are released for the first time. The live (not studio!) recordings of Bach's preludes and fugues made at the concerts in 1950 and dedicated to the memory of the great cantor will be a real gift for the listeners. The major “bonus” of the set is Tchaikovsky’s First Concerto recorded by Yudina on a tour in Kiev in 1954 with the State Orchestra of the Ukrainian SSR conducted by Nathan Rachlin. “The thinker musician”, “preacher”, “medium” are the epithets that accompanied Yudina in her lifetime. As for her, she disliked being called a pianist. Playing and teaching, enlightenment, poetry, philosophy, religious devotion – all aspects of Maria Yudina’s personality constituted an inseparable synthesis. Whatever she played – her beloved Bach, Mozart, Schubert or “serialist” Webern, or Stravinsky, Beethoven, Debussy or the composers who lived in Leningrad during the siege – everything sounded unexpected, paradoxical, but extremely convincing.