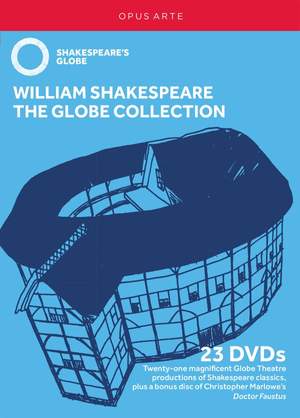 Toby Frow - The Taming of the Shrew

Jonathan Munby - The Merchant of Venice; Antony and Cleopatra

Jeremy Herrin - Much Ado About Nothing; The Tempest

An invitation to stand with kings in battle, to fall in love, to witness the brutal machinations of politics, and to laugh with rogues in this 23-disc collection.

Shakespeare’s Globe, the reconstruction of his most famous London theatre, is at the centre of the astonishing global fascination with Britain’s greatest playwright. Completed in 1997, it is a living theatrical experiment that has allowed audiences to experience the impact of Shakespeare’s stories in the architecture for which he wrote; the result has been a rediscovery of the plays in all their human richness.

This collection brings together 22 Globe Theatre productions from 2009 to 2015 – during the artistic directorship of Dominic Dromgoole – featuring the finest actors and leading directors in a project committed to creating ever wider access to this rich cultural heritage. Shakespeare’s Comedies, Histories and Tragedies contain dazzling poetry, romance, epic power struggles, human suffering and ingenious, raucous humour.

These films capture the unique atmosphere and theatrical space of the Globe Theatre, with the exhilarating sense of interaction in live performances between the audience and the actors on stage exquisitely maintained on screen.