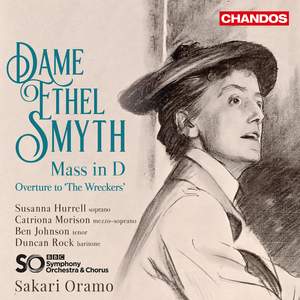 Dame Ethel Smyth: Mass in D & Overture to 'The Wreckers'

Oramo rises to the work’s ambition with a fiercely committed, highly persuasive reading that indulges generosity of scale and imagination while pinpointing the Mass’s many felicities of detail.... — BBC Music Magazine, December 2019, 4 out of 5 stars (Performance) / 5 out of 5 stars (Recording) More…

Smyth: Mass in D for soloists, chorus, orchestra and organ

Recording of the Week,  Ethel Smyth's Mass in D from Sakari Oramo and the BBC Symphony Orchestra

Sakari Oramo conducts the BBC Symphony Orchestra and Chorus in a magnificent performance of Dame Ethel Smyth's Mass in D and overture to The Wreckers.

The BBC Symphony Orchestra and Chorus under Oramo with an exceptional quartet of soloists give a vivid and heartfelt interpretation of Smyth’s earliest large-scale choral work. Dame Ethel Mary Smyth, DBE was an English composer and a member of the women's suffrage movement. Her compositions include songs, works for piano, chamber music, orchestral works, choral works and operas. Smyth tended to be marginalized as a ‘woman composer’, as though her work could not be accepted as mainstream, yet when she produced more delicate compositions, they were criticized for not measuring up to the standard of her male competitors. She was the first female composer to be granted a damehood. Smyth's extensive body of work includes the Concerto for Violin, Horn and Orchestra and the Mass in D. Her opera The Wreckers is considered by some critics to be the "most important English opera composed during the period between Purcell and Britten." Another of her operas, Der Wald, mounted in 1903, was for more than a century the only opera by a woman composer ever produced at New York's Metropolitan Opera (until Kaija Saariaho's L'Amour de loin in December 2016).

Oramo rises to the work’s ambition with a fiercely committed, highly persuasive reading that indulges generosity of scale and imagination while pinpointing the Mass’s many felicities of detail. Abetted by a chorus and orchestra on incisive top form, the Credo’s opening packs a pugnacious punch.

This performance by the BBC Symphony Orchestra and Chorus, conducted by Sakari Oramo, is impressively rousing... The recording also captures Smyth and her musical army on the march in splendid sound.

The Mass is by far the deeper, grander work, full of extraordinary music and, as Steane noted, considered by some to be her masterpiece...Oramo’s pacing is fairly swift, especially in the Kyrie, but never hurried...Oramo’s account of the Overture to The Wreckers is well groomed but fairly driven.

The overture, naturally enough, opens the album – a dramatic beginning, worthy of the silver-screen swashbucklers that would captivate audiences a few decades later…The Mass is a magnificent, uplifting work that, while far too large for liturgical use, deserves to become a regular of the concert-hall and choral-society.

The Credo and the Gloria (placed last!) blaze, the Sanctus and Benedictus (soprano solo and women’s chorus) are tender and beautiful.

It’s gratifying to find it getting the kind of recording it deserves from forces who can do justice to its ambition...the BBC Symphony Orchestra and Chorus are on excellent, sumptuous form, and this recording should win the mass many new fans.