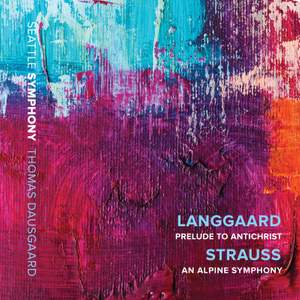 Wandering by the Brook (Live)

At the Waterfall (Live)

On the Alpine Pasture (Live)

On the Glacier (Live)

On the Summit (Live)

Calm Before the Storm (Live)

Thomas Dausgaard and the Seattle Symphony return with inspiring and powerful performances of works rooted in the fascination with the Antichrist. For Langgaard it became his opera, Antichrist, which was also the original title for Strauss’ An Alpine Symphony. Coupling Langgaard’s Prelude to Antichrist with Strauss’ An Alpine Symphony, this album explores the composers’ disparate ideological interpretations of the Antichrist in expansive, thought-provoking live performances, superbly played by the Seattle Symphony. With naturalistic imaging, depth of field and dynamic range, all Seattle Symphony Media recordings have been engineered to audiophile standards and aim to capture as realistically as possible the sound of the orchestra performing on the Benaroya Hall stage.