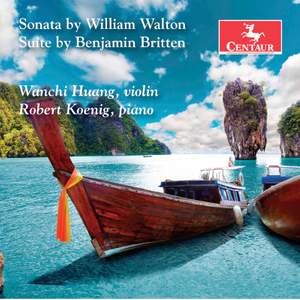 This album features two true masterpieces of the 20th Century for violin and piano, beautifully performed by Wanchi Huang, violin, and Robert Koenig, piano. Wanchi has been praised numerous times (“...her incisive technique and an exceptionally rich and beautiful tone...” Phil's Classical Reviews, Audio Video Club of Atlanta, November 2015) for her recordings and performances in chamber music, solo recitals, and as a soloist with orchestras throughout North America and Asia, including the Kennedy Center, Carnegie Hall, Lincoln Center, and numerous music festivals in the world. Pianist Robert Koenig has established a reputation as a much sought-after collaborative pianist and chamber musician. He performs regularly in major centers throughout the world with many of this generation’s most renowned musicians. Recent engagements have included performances at Carnegie Hall in New York, The Kennedy Center in Washington, DC, Suntory Hall in Tokyo, the Concertgebouw in Amsterdam, the Louvre Museum in Paris, and Royal Festival Hall in London.