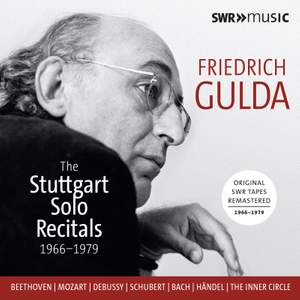 This is the first of four releases that feature the SWR recordings of Friedrich Gulda. All recordings on this album are being released here for the first time. The recording of the "Inner Circle" on album 7 is to date the only one of Guldas jazz ensemble. The series contains, among solo repertoire and concerts, also compositions by Freidrich Gulda himself. The whole series is thus an extensive documentation of Guldas music universe. Friedrich Gulda began his career in music studying at the Vienna Music Academy. He went on to win first prize at the 1946 Geneva International Music Competition, and made his Carnegie Hall debut in 1950. While most renowned for his Mozart and Beethoven interpretations, he is also remembered for his free improvisation and jazz interests.