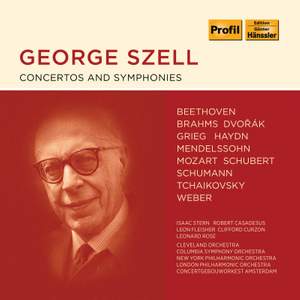 Mozart: Divertimento No. 2 in D Major for winds and strings, K.131

Schumann: Symphony No. 1 in B Flat Major, Op. 38 "Spring"; Frühlingssinfonie

George Szell was both feared for his relentless, intense rehearsals and celebrated for their artist results. He turned the Cleveland Orchestra, of which he was Music Director from 1946 to 1970, into one of the world's most technically brilliant orchestras. There are also impressive recordings which document his work with the New York Philharmonic Orchestra and the Metropolitan Opera (1942 – 1946). His path to becoming one of the world's best conductors was meticulously prepared. Szell studied in Vienna, where he had given his debut concert at the age of 10, and in Leipzig, where his teachers included Max Reger. After conducting the Berliner Philharmoniker playing one of his own compositions aged 16, Richard Strauss hired Szell as piano accompanist at the Hofoper in Berlin, where he remained between 1914 and 1917. He then went on to succeed Otto Klemperer at the Strasbourg Opera House, from where he moved to the New German Theatre in Prague, then to Darmstadt and Düsseldorf, before finally becoming Principal Conductor of the Berlin State Opera (1924 – 1929), Director of the Berlin Radio Symphony Orchestra and teacher at the Berlin Academy of Music (1927 – 1930). He returned to Prague between 1930 and 1936, this time as General Music Director, during which time he also conducted the Scottish National Orchestra and the Residentie Orkest in The Hague (1937 – 1939). When World War II broke out just after he had finished a tour of Australia, George Szell was able to emigrate to New York, and it was there that Toscanini invited him to conduct the NBC Symphony Orchestra. Szell also conducted premieres of works by Barber, Blacher, von Einem and Walton. He teamed up with the young pianist Leon Fleischer for the big Beethoven and Brahms concertos, and the two produced recordings which still serve as a benchmark today.