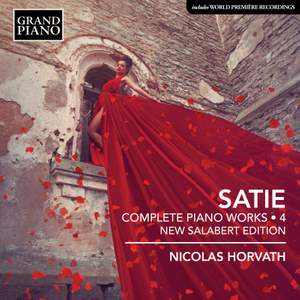 Satie: Jack in the Box

“Everything I undertake misfires immediately. I produce dirty rubbish and that will accomplish nothing.” So wrote Erik Satie in 1903 during a period of transition that saw him produce the last of his Rose + Croix style music in Verset laique & somptueux, but in making a living writing for the music halls, he also created hugely popular songs such as Je te veux. The works on this fourth volume of Satie’s complete solo piano music were written between 1897 and 1906. They include rare theater music and tender waltzes that contrast with jaunty ragtime and pantomime dances. Nicolas Horvath began his music studies at the Academie de Musique et de Theatre Prince Rainier III, and at the age of 16 he caught the attention of the American conductor Lawrence Foster. His other mentors include a number of distinguished international pianists, including Liszt specialist Leslie Howard. He is the holder of a number of awards, including First Prize of the Scriabin and the Luigi Nono International Competitions. He has become noted for hosting concerts of unusual length, sometimes lasting over twelve hours, such as the performance of the complete piano music of Erik Satie at the Paris Philharmonie before an audience of 14,000 people and recently played together with Philip Glass also at the Paris Philharmonie.