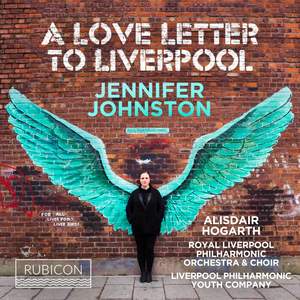 A Love Letter To Liverpool

The result is musically satisfying and rather touching, and Johnston lends her warm, communicative mezzo to a range of idioms…The most intriguing parts of the disc are the new works; no fewer... — Gramophone Magazine, November 2019 More…

The Spinners: In My Liverpool Home

Bantock: Song to the Seals

Richard Miller: The Gateway to the Atlantic

Simpson, M: What Will They Tell Me Tonight?

Hough: Madam and her Madam

Paul MC Cartney, Carl Davis: The World You're Coming Into

trad.: The Leaving of Liverpool

Stevie Jackson: All Our Different Voices

The mezzo talks to Katherine about her eclectic tribute to her home city, released last month on Rubicon and featuring music by Ives, Bantock, The Beatles, The Spinners, and seven young Liverpool composers.

The long-awaited debut solo album of one of the UK’s brightest classical music stars, ‘A Love Letter To Liverpool’ is Jennifer Johnston’s heartfelt tribute to her home city, with piano accompaniment from Alisdair Hogarth.

Jennifer Johnston comments: “I am thrilled that my debut album is a tribute to my home city, its music and its people. I am proud to be a Scouser, and still make Liverpool my home, so becoming Artist in Residence with the Royal Liverpool Philharmonic Orchestra is a huge honour.”

All profits from the album will be donated equally to two outstanding charitable organisations: Alder Hey Children's Hospital and Charity supports the work of one of the world’s leading specialist children’s hospitals, and money raised by the album will contribute to the construction of a critically important in-patient mental health unit for under-13’s; and the Liverpool Phil’s Youth Company, which encourages the development of the next generation of young musicians and composers from across Merseyside. Jennifer is especially proud that this album contains the works of seven of the Liverpool Phil’s young composers, all of whom are at the beginning of their careers. Jennifer gratefully acknowledges the support of the album’s principal sponsors; Simon Yates & Kevin Roon, the Rushworth Foundation and Amion Consulting.

The result is musically satisfying and rather touching, and Johnston lends her warm, communicative mezzo to a range of idioms…The most intriguing parts of the disc are the new works; no fewer than eight, all specially commissioned for the occasion...The cause is good, and the musical content is as intriguing as it is enjoyable. Don’t hold back.

Johnston’s eclectic tribute to her native city integrates traditional, popular and classical into a seamless musical panorama, exquisitely sung throughout. A beauty.

This is a fierce, big-hearted and atmospheric tribute to Johnston’s home city, celebrated in rewardingly unsoupy arrangements of popular romantic, traditional and Beatles songs – Johnston handles them all with rich colours, elegance and feeling.

Her mezzo really is plush, quite grand when she chooses. Johnston offers a huge selection of numbers, 21 in all, which I felt could have been trimmed down a bit. Along with old favourites (You’ll Never Walk Alone is inevitable but worth it) she offers numbers by seven of the Liverpool Philharmonic’s young composers – a nice touch.