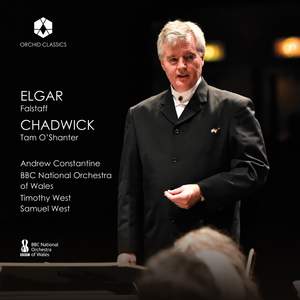 The BBC National Orchestra of Wales give a bristlingly characterful account of Elgar’s score which competes colourfully with the many others available…The BBC players tuck into Chadwick’s piece... — BBC Music Magazine, December 2019, (Performance) / (Recording) More…

I Am Not Only Witty in Myself

I. Falstaff and Prince Henry

Come, Sir, Which Men Shall I Have?

IV. King Henry V's Progress - The Repudiation of Falstaff and His Death

This release features a unique recording of Elgar’s Falstaff played by the BBC National Orchestra of Wales under Andrew Constantine in two versions: both with and without excerpts from Shakespeare’s Henry IV Parts I and II performed by Timothy West and Samuel West. Alongside Elgar’s magnificent response to Shakespeare’s loveable rogue, we hear American composer George Whitefield Chadwick’s Tam O’Shanter, an interpretation of the poem by Scottish national poet Robert Burns, featuring Erik Chapman as Chadwick and Billy Wiz as Burns. Both Falstaff and Tam O’Shanter are louche, larger-than-life characters, inspiring Chadwick to write a score full of color and humor, and Elgar to create a portrait of Shakespearean scale and depth. Elgar’s work can be heard here in an exceptional performance from the BBC National Orchestra of Wales, in one version interspersed with readings from Timothy West as Falstaff, and Samuel West as Prince Hal.

The BBC National Orchestra of Wales give a bristlingly characterful account of Elgar’s score which competes colourfully with the many others available…The BBC players tuck into Chadwick’s piece with gusto, especially in the feverish and brilliantly scored Alloway Kirk episode.

While the action is generally crisp and dramatic—the robbery at Gadshill is both amusing and sinister, while King Henry’s Progress combines majesty and anticipation as effectively as the very best versions on the market today—it all moves along with an effortless grasp of Elgarian rubato and a sure instinct for knowing when to ease up.

A striding, symphonic account [of Falstaff] by a conductor who clearly loves and understands the work, played with polish and flair…[The Chadwick is] a gorgeous piece of late-Romantic tartanry, and Constantine’s big-hearted performance easily rivals Neeme Järvi’s Detroit version for character, pace and colour.

An extremely effective experiment in performance.