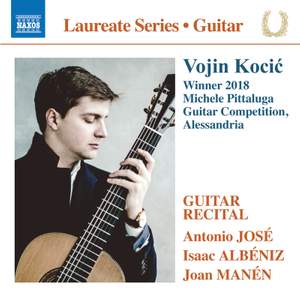 Representing three generations of Spanish composers, these works reveal the diversity and depth of the Iberian musical imagination. Albeniz’s Suite is a perennial evocation of Iberian Romanticism that transcribes naturally from piano to guitar, and Jose’s original and inventive Sonata revives a reputation cut short by the Spanish Civil War. Dedicated to Segovia, Manen’s Fantasia-Sonata is rich in Catalonian sentiment both elegiac and celebratory. Vojin Kocic’s debut recording, ‘and what a debut it is’ (The WholeNote), can also be heard on Naxos.