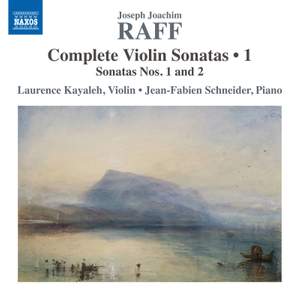 Though he was known primarily as a symphonist, and despite his large portfolio of piano works, Raff’s first love was the violin and his pieces for the instrument were promoted by no less a virtuoso than Sarasate, The Violin Sonata No. 1 is a powerful work teeming with expressive intensity and lyrical beauty- it remained the most performed of his violin sonatas during his lifetime. The large-scale Violin Sonata No. 2 offers his characteristic lyric impulse and virtuoso fireworks. Laurence Kayaleh has performed as a guest soloist with many distinguished orchestras, including the Tonhalle Orchester Zurich, the Russian National Orchestra, the National Symphony Orchestra, and many others. She has recorded the complete works for violin and piano by Medtner, Honegger and Catoire for Naxos. She plays a 1742 Guarneri which belonged to the eminent violinist and pedagogue Carl Flesch.