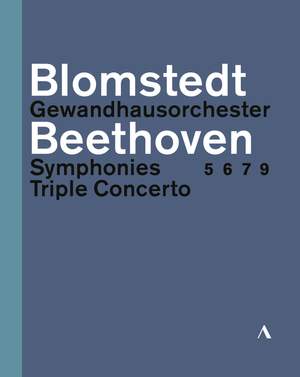 More than 200 years after its premiere at the Gewandhaus in Leipzig, Isabelle Faust, Jean-Guihen Queyras and Martin Helmchen have congenially mastered the artistic challenge of Beethoven’s gemstone. Under Herbert Blomstedt's sensitive direction, the soloists unite chamber musical intimacy together with virtuoso sophistication – and prove once again that the Triple Concerto is an unduly underestimated, much too rarely programmed masterpiece. With the composer's 5th Symphony, Blomstedt succeeds in achieving an entirely new perspective of this work. In his Sixth Symphony, the “Pastoral”, Ludwig van Beethoven conveys his musical message in such a way that lets the listener literally “see” images of beautiful nature, tempestuous storms, and shepherds singing in the fields, whereas in his Seventh Symphony, Beethoven lets the music speak for itself. The performances of these works by the Gewandhausorchester give the uplifting feeling that the intentions of both composer and performers are united in serving the musical message. The humanist and musician Herbert Blomstedt embodies this truth in a unique way, creating an atmosphere where the wonders of music all become true. Ludwig van Beethoven's 9th Symphony and the musical city of Leipzig are closely intertwined with each other: Felix Mendelssohn, Kapellmeister of the Gewandhausorchester, made the work an indispensable part of the concert hall repertoire and Arthur Nikisch, one of his successors, established in 1918 the worldwide tradition of performing this groundbreaking and pioneering work at the end of the year. Herbert Blomstedt once again conducted Beethoven's Ninth in Leipzig for the 2016 New Year celebrations. With his former orchestra, of which he has been Conductor Laureate since 2005 and with whom he enjoys a close friendship, he achieves a gripping interpretation of this monumental work.