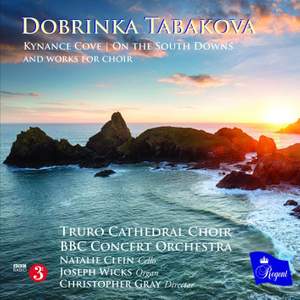 Dobrinka Tabakova: Kynance Cove, On the South Downs, and Works for Choir

Like much other music written for cathedral choirs, the works on this disc often inhabit an engaging post-Vaughan Williams world, with a periodic sprinkling of spice in the harmony, but nothing... — BBC Music Magazine, December 2019, 4 out of 5 stars More…

Tabakova: Of a rose sing we

Tabakova: On the South Downs

In recent years Regent has focussed increasingly on showcasing works by living composers, and we are delighted to present this complete CD of inspiring compositions by Dobrinka Tabakova recorded in the warmth of the wonderful Truro Cathedral acoustic.

Following the introduction of girl choristers in 2015, Truro Cathedral Choir, supported by Arts Council England, set up a partnership with composer, Dobrinka Tabakova. The radiant performances embodied in this disc are the culmination of that very special collaboration with Tabakova while she was simultaneously composer in residence for the BBC Concert Orchestra. The Orchestra travelled to Cornwall to perform and record with the choir. Dobrinka composed ‘Kynance Cove’ for both groups, taking inspiration from that beautiful part of the Cornish coastline she visited as a child.

Tabakova composed more than half an hour of new music for Truro Cathedral Choir, all featured on this new CD. The first work “Of a rose sing we” was performed on Christmas Eve at Truro Cathedral’s famous Festival of Nine Lessons and Carols. Her Truro Canticles formed the centrepiece of the first live BBC Radio 3 broadcast by Truro Cathedral Choir with its girl choristers on International Women’s Day 2017.

Like much other music written for cathedral choirs, the works on this disc often inhabit an engaging post-Vaughan Williams world, with a periodic sprinkling of spice in the harmony, but nothing too acerbic. There is no doubt about Tabakova’s ability to create and sustain a mood, but a little contrasting grit in the oyster would be welcome in order to appreciate the long-breathed loveliness all the more.

If you want to experience the sweeping contradictions of Cornwall, pastoral landscape against crashing sea, troglodyte mining against singing skies, then it’s Dobrinka Tabakova’s Kynance Cove that you need to hear. Her setting of the labourer poet John Harris is on a grand scale, full of mineral harmonies and organic melodism. The Truro choir is in inspired form, with the voices perfectly balanced between weight and delicacy, earthiness and airiness.

An a cappella Marian antiphon, Alma redemptoris mater, makes a gentle opening, bathing the listener with a sense of wonderment and increasing fervour…Those expecting something exuberant here might be surprised by its calm, shimmering unhurriedness. The 20 girl choristers are perfectly blended and balanced…Bravo Truro!