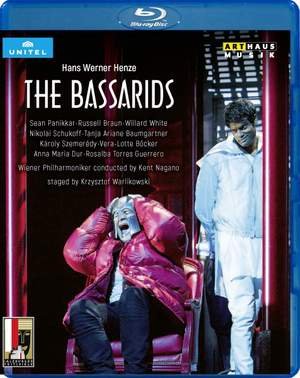 Live recording from the Salzburger Festspiele, 2018

The opera, inspired by Euripides’ tragedy The Bacchae, is as seductive as it is topical: When Dionysus – is he a charlatan? is he a demigod? – bursts into the intact world of ancient Thebes, he plunges a city into chaos. In stark contrast to his cousin, King Pentheus, who leads a life marked by purity and asceticism, Dionysus preaches intoxicating excess and sensuality. Aware of the story’s political dimension that resonates in present day politics, Krzysztof Warlikowski brings one of his famed psychological stagings to the Felsenreitschule in Salzburg. In the gigantic three-part set of Malgorzata Szczesniak the captivating tale unfolds like a film using split-screen techniques .

With “an ensemble that without exception has an outstanding cast”, the musical realization is “simply sublime” (Der Standard). tenor Sean Panikkar excels with displays of effortless heroic power as Dionysus - “a triumph” (BR Klassik). His opponent Pentheus is excellently sung by Russel Braun with carved diction and vocal focus. How Tanja Ariane Baumgartner and Vera-Lotte Böcker portray Agave and Autonoe is “an art of singing and playing of the highest order” (Neue Zürcher Zeitung). Star conductor Kent Nagano, who was close to Henze, includes “The Judgment of Calliope” in the festival Bassarids, a 20-minute section included in the original score, which adds a new dimension to the opera’s presentation of the Dionysian cult.