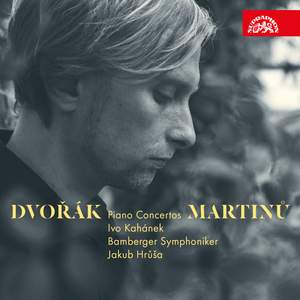 There is no higher praise possible than to say that the spirit of Rudolf Firkušný hovers over this new release…Kahánek’s new versions are worthy of standing in this company, and his account of... — BBC Music Magazine, Christmas 2019, 5 out of 5 stars More…

An extraordinary constellation of artists is one the major attributes of the new recording – a Czech conductor and a Czech soloist, and a German orchestra, who have a Czech sound in their DNA. All three of them enjoy great renown in both the European and global contexts.

Martinů wrote his Piano Concerto no.4, “Incantation”, in New York in the twilight of his life, when it was evident that he would never return to his homeland. The connection between Ivo Kahánek and Martinů is profound indeed, with the pianist having played the Incantation at concert halls all over the world (BBC Symphony Orchestra, Jiří Bělohlávek – BBC Proms; Berliner Philharmoniker, Sir Simon Rattle, etc.). The performance of the Incantation in Bamberg, captured on the present album, was lauded by the critics as revelatory.

The studio recording of Antonín Dvořák’s Piano Concerto (based on Sviatoslav Richter’s account) ranks among the most remarkable returns to the composer’s original version of the work, forbearing the “effective and virtuoso improvements” carried out by its later arrangers. It showcases the tender and melodious music of Dvořák, who always strove to emphasise cordial expression, giving it preference to instrumental impression. An exceptional encounter of outstanding Czech (and other) musicians, performing an exceptional Czech – and global – repertoire.

There is no higher praise possible than to say that the spirit of Rudolf Firkušný hovers over this new release…Kahánek’s new versions are worthy of standing in this company, and his account of the Dvořák certainly asks the question again: why does this exhilarating work remain so underrated?... Kahánek, now 40, has lived with this Martinů concerto for more than half his career…Together with Hrůša he ensures that the music lives up to its title, Incantations: there is certainly a feeling of spells being cast here.