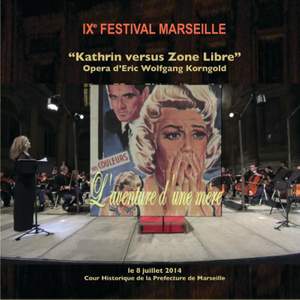 ‘Die Kathrin’, the last opera of the brilliant pre-war Austrian born composer Erich Wolfgang Korngold, presented here as a dramatized musical adaption from 2014 titled ‘Kathrin versus Zone Libre’, by artistic director Michel Pastore for the Festival of Forbidden Music, Marseillie. Released on two discs, DVD-AUDIO and DVD-VIDEO, this is the only live performance of Die Kathrin in the market. The only other available recording of Die Kathrine is on a 2CD set released on the CPO label dating from 1998.

Eric Wolfgang Korngold, like so many other Jewish and East European composer of the 20th century were denied identity and artistic merit in their own countries under the cultural genocide committed by the Nazi and Stalinist regimes.

Some fled into exile and others were interned in labour and concentration camps, resulting in much of their music being overlooked, forgotten or lost. However, through the ‘Festival of Forbidden Music’ organisation in Marseillie, great efforts are being made to find and restore lost or neglected works

of cultural significance that survived the genocide and committing them to performance in the recording studio and concert hall.

A dramatized musical adaption of Korngold’s opera ‘Die Kathrin’ (‘Kathrin versus Zone Libre’) was the first to benefit from the organisation’s dedicated work.