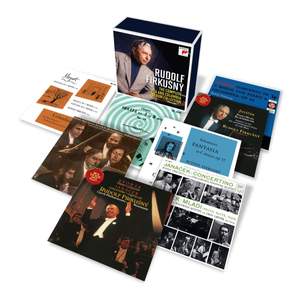 Rudolf Firkušný’s RCA and American Columbia Recordings To mark the 25th anniversary of the renowned Czech pianist’s death, Sony Classical proudly presents a comprehensive collection of the recordings made by Rudolf Firkušný for American Columbia and RCA Red Seal between 1949 and 1993. Born in 1912 in Napajedla (Moravia), Firkušný was taught by some of the outstanding musical figures of his time: piano and composition in Brno for ten years by Janáček (who exclaimed about him: “Such talent is born once in a century”), piano by Vilém Kurz in Prague, and composition by Dvořák’s son-in-law Josef Suk, also in Prague. Later – thanks to support from Tomáš Masaryk, Czechoslovakia’s first president – he studied piano with Alfred Cortot in Paris and with Artur Schnabel in Berlin and Italy. During the 1930s Firkušný achieved international fame as an interpreter of the core concerto, chamber and solo repertoire. But his unique reputation today rests chiefly on his unequalled mastery in the piano music of his Czech compatriots Dvořák, Janáček and Martinů. “If you have not heard Firkušný in these works,” wrote one critic in 1995, “you have not really heard them at all.” He was often referred to as “the world’s foremost exponent of Czech music”. Firkušný’s recording career, which spanned half a decade, began in earnest at Columbia’s 30th Street studio after he had fled Nazi Europe and settled in New York. There, starting in 1949, he set down memorable interpretations of Mozart, Beethoven, Schubert, Schumann and Chopin, as well as Samuel Barber and Howard Hanson – among the many American composers whose works he premiered. All of these are, of course, included in Sony Classical’s new collection. It was in 1953 that Firkušný first recorded Janáček’s piano works – including the Concertino with principals from the Philadelphia Orchestra – when these masterpieces were hardly known outside of Czechoslovakia. Two years later, with the Cleveland Orchestra under George Szell – with whom he had first performed the piece in 1933 – he made his “wonderful” (ClassicsToday) first recording of Dvořák’s then still neglected Piano Concerto, playing his teacher Vilém Kurz’s revision of the piano part – the composer’s original was considered virtually unplayable. At Columbia’s 30th Street Studio in 1975–76 with the Juilliard Quartet, Firkušný made a “superb” (Gramophone) recording of the Dvořák Piano Quintet and Bagatelles, as well as “admirably decisive performances” (Gramophone) of Dvořák’s two Piano Quartets. Having memorably recorded the Chopin and Prokofiev Cello Sonatas for RCA in 1965 with Gregor Piatigorsky, Firkušný signed with the label in the late 1980s and proceeded to document the “Indian summer” of his career. In 1988 in London, joined by the Royal Philharmonic under Claus Peter Flor, he recorded Franck’s Symphonic Variations with “an enlivening sense of rhythm … impeccable poise and style” ClassicsToday). The next year, he made an album of solo piano music by Martinů, largely composed for him (“Firkušný’s performances are revelatory, not only of the stature of this music and his love for it, but of a deeply musical pianism … The recording is all that one could wish for” – Gramophone). He followed that up with new recordings of works he had committed to disc earlier: the Dvořák Piano Concerto – this time using the composer’s original piano part – with the Czech Philharmonic under Václav Neumann (“definitive” – MusicWeb); the Dvořák Piano Quintet (with the Ridge String Quartet); the Janáček solo works (“Firkušný’s quickness of response, his sensitivity of phrase, his ability to seek out the essence of Janáček’s lyrical statements in a brief melodic curve are as rewarding as ever” – Gramophone); and the Janáček Concertino and Capriccio with Czech soloists during a highly acclaimed return to Prague in 1991 following the country’s liberation. In New York, he also recorded Martinů’s Cello Sonatas with János Starker (“Firkušný’s authority in this repertoire is unchallenged, and Starker has a natural eloquence” – Penguin Guide) and a recital of songs by Dvořák, Janáček and Martinů with soprano Gabriela Beňačková (“a record of great and rare beauty” – Gramophone). Firkušný’s final recording, made at the Rudolfinum in Prague in 1993 and released posthumously, was of three Piano Concertos by Martinů, two of which were composed for him. Gramophone’s reviewer called the disc “a revelation … The Czech Philharmonic under Libor Pešek give Firkušný dedicated and sympathetic support … What is also astonishing is that at no time does Firkušný’s playing betray an inkling of his years: he was 81 when these performances were given! … He was an aristocrat among pianists and this is a worthy memorial to him.” Rudolf Firkušný was also a distinguished teacher at New York’s Juilliard School from 1965 until his death in 1994. He is buried near Janáček in Brno’s Central Cemetery.