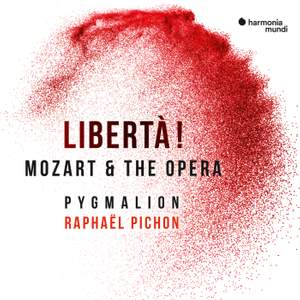 Pichon’s approach is ingenious…Sabine Devieilhe is the show’s star. Her distinctive soprano excels not only in the fiery passage work of ‘Da Schlagt’ (from Mozart’s Der Schauspieldirektor) but... — BBC Music Magazine, December 2019, (Performance) / (Recording) More…

The French conductor talks to Katherine about recording three 'mosaics' of music which Mozart composed or encountered during the period leading up to his life-changing collaboration with Lorenzo Da Ponte, including extracts from his abandoned operas Lo sposo deluso and L'oca del Cairo, and music by Salieri, Paisiello and Soler.

Between Die Entführung aus dem Serail and the advent of the famous Da Ponte trilogy, Mozart threw himself frantically into the search for the right libretto, capable of taking the spectator to lands still unexplored where the drama and the psychology of the characters would be sublimated by the music.

Hence, in the years between 1782 and 1786, Mozart set up a veritable laboratory for dramatic music: a musical corpus of concert arias, sketches and stylistic exercises like the canon - brilliantly organised here as an imaginary dramma giocoso in three scenes, each heralding in its own way one of the summits to come: Figaro, Don Giovanni, Così…

Pichon’s approach is ingenious…Sabine Devieilhe is the show’s star. Her distinctive soprano excels not only in the fiery passage work of ‘Da Schlagt’ (from Mozart’s Der Schauspieldirektor) but also in the legato warmth of ‘Ridente la calma’…The orchestral playing throughout is texturally clear, musically fluent and theatrically apt.

Beautifully performed and thoroughly enjoyable…The three overtures go with a swing, the fiery Thamos overture being especially suitable for ‘The Debauchee Punished’…Whether or not you go along with Pichon’s meta-operas, this is an excellent selection that shows Mozart preparing for the three comic masterpieces.

The period ensemble’s characterful playing is given a clear sense of direction by its artistic director…Chest and the chorus are thrilling in an extraordinary arrangement of an extract from Thamos.

An electrifying portrait of a composer on the cusp of greatness...ensembles from L’oca del Cairo and Lo sposo deluso crackle with energy and the more familiar concert arias are brilliantly sung, but the unaccompanied canons are the real pearls. A definite Record of the Year for me.

While the logic of the whole may not be purist, it’s totally ingenious and brilliantly delivered.

It is a fascinating premise: Mozart underwent great personal and artistic change from 1782-86 and produced a wealth of vocal material that Pichon has drawn on for this project. Six singers share the roles with dazzling results. Sabine Devieilhe gets star billing, but to be ungallant I must single out Siobhán Stagg: her soprano is creamy yet pellucid, even- toned and beguiling. Pichon builds the tension and the recorded sound is excellent.