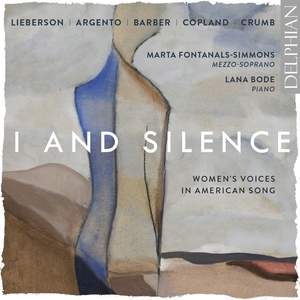 I and Silence: Women’s Voices in American Song

[‘Why do they shut me out of heaven?’] is a good example of Fontanals-Simmons’s tendency to prioritise solidity of vocal production and excellent diction over flashy point-making and expressive... — BBC Music Magazine, October 2019, 4 out of 5 stars (Performance) / 5 out of 5 stars (Recording) More…

No. 4, The World Feels Dusty

Argento: From the Diary of Virginia Woolf

‘Did I sing too loud?’ asked Emily Dickinson in 1861, in a poem set a century later by Aaron Copland. The expectations of silence often placed on women, historically and politically, and music’s power to break through them, are the themes of this deeply personal recital by mezzo-soprano Marta FontanalsSimmons and pianist Lana Bode.

Their programme reflects and channels the voices of female writers and musicians: Dickinson herself, Sara Teasdale and Virginia Woolf are among those whose words are set in the works brought together here, two of which – Dominick Argento’s From the Diary of Virginia Woolf and Peter Lieberson’s Rilke Songs – were written for great mezzo-sopranos of the recent past, Dame Janet Baker and Lorraine Hunt Lieberson.

[‘Why do they shut me out of heaven?’] is a good example of Fontanals-Simmons’s tendency to prioritise solidity of vocal production and excellent diction over flashy point-making and expressive distortions. She prefers the words and music to do the talking, and they do so eloquently in the touching account of George Crumb’s ‘Let it be forgotten’ which caps this satisfying recital.

The music is deeply examined by Fontanals-Simmons and pianist Lana Bode…Fontanals-Simmons has great depth of vocal tone that she successfully scales down for Woolf’s more introspective moments, and is particularly effective in ‘Last Entry (March1941)’…Yet she underplays some significant rhetorical moments.

The British-Spanish mezzo emerges as a strong artistic personality and an unflinchingly direct communicator on her imaginatively-conceived debut album, her attractively wiry tone and narrow vibrato the ideal medium for these settings of texts by female writers exploring anxiety, instability and frustration; Argento’s From the Diary of Virginia Woolf is a real tour de force, from the jaded loucheness of Rome to the existential terror of War.

A remarkable exploration of “women’s voices in American song”, this five-work, tonally mellifluous sequence begins with three of Copland’s 12 Poems of Emily Dickinson and ends with an early song by George Crumb.