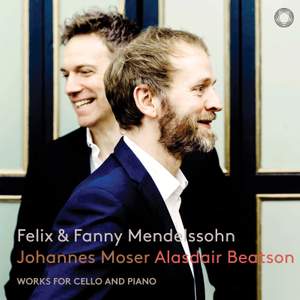 Johannes Moser and Alasdair Beatson offer fine, full-blooded performances of all this repertoire. Beatson uses an Érard piano from 1837…allowing for maximum clarity and lightness in rapid passagework,... — BBC Music Magazine, December 2019, 4 out of 5 stars More…

German-Canadian cellist Johannes Moser and Scottish pianist Alasdair Beatson present a moving portrait of the Mendelssohn family with this recording of pieces by the siblings Felix and Fanny. Once composed for the popular Sunday Sessions at the Berlin Mendelssohn family house, these works fit into the typically nineteenth-century tradition of domestic musicmaking, albeit at the highest thinkable level. Beatson plays an 1837 Érard forte piano, identical to the instrument that belonged to the Mendelssohn household when these pieces were composed.

Besides Felix Mendelssohn’s two sonatas for cello and piano, his Variations concertantes, op. 17, Lied ohne Wort e, op. 109 and Albumblatt in B Minor are featured. Fanny HenselMendelssohn’s Fantasia in G Minor and Capriccio in A-flat Major show what could have become of this talented female composer if societal conventions had not restricted her musical activities to the private salon.

This is Moser’s fifth album as an exclusive PENTATONE artist, after releases with the cello concertos of Dvořak and Lalo (2015), Elgar and Tchaikovsky (2017), works for cello and piano by Rachmaninov and Prokofiev (2016, awarded with a diapason d’or and ECHO Klassik 2017), and cello concertos by Lutosławski and Dutilleux (2018). He records for the first time with Alasdair Beatson, who makes his PENTATONE debut.

Johannes Moser and Alasdair Beatson offer fine, full-blooded performances of all this repertoire. Beatson uses an Érard piano from 1837…allowing for maximum clarity and lightness in rapid passagework, as well as an ideal balance between the two instruments. Altogether, a fine achievement, well recorded.

Mendelssohn’s keyboard-writing benefits from a piano with a shallower action and greater transparency than the traditional Steinway and both players relish these qualities, with the full-throated opening of the Second Sonata never sounding overbearing, while the second movement has a winsome charm.

The palpable rapport between the two players is something very special, and Moser responds to the magical colours which Beatson draws from his Érard with consummate imagination and sensitivity.

Everything is beautifully played, and in truly conversational style – for this is definitely duet music, rather than cello solos accompanied by piano…A disc that might change your mind about the Mendelssohns.

[Moser and Beatson] capture the music with unbridled joy and infectious high spirits.