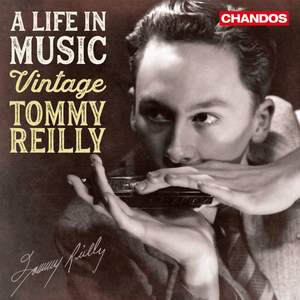 Moody, J: Voice from the Past

Smetana: The Bartered Bride: Skocná - Dance of the Comedians

Lecuona: The Breeze and I

The Breeze and I (Arr. T. Reilly for Harmonica & Piano Quartet)

Born in Ontario in August 1919, Tommy Reilly studied violin from the age of eight, & began playing harmonica at the age of eleven. It was not until his arrest (while studying violin at the Leipzig Conservatory) and subsequent internment 193945 in prisoner-of-war camps that he developed his virtuosity on the harmonica, basing his ideas of phrasing and interpretation on the playing of Jascha Heifetz. Returning to London in 1945, he began parallel careers as a concert soloist & recitalist, a popular BBC radio and television performer, & a studio musician-composer. He toured all over the world as a concert soloist with many major European orchestras. Inspiring the composition of more than 30 works by other composers, Reilly also transcribed a great deal of repertoire for the instrument, in addition to composing his own works. In 1967 he designed a concert harmonica, later manufactured by Hohner & marketed as the Silver Concerto Chromonica. In 1992, he became the first harmonica player to be made a Member of the Order of the British Empire. He was awarded Gold Medal of the Deutscher Harmonika-Verband & a Golden Badge from the British Association of Composers, Authors and Songwriters.