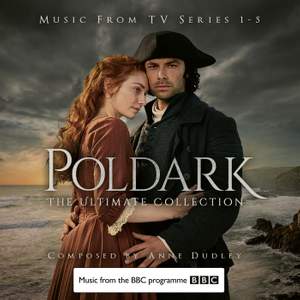 Anne Dudley’s is some of the very best music written for the small screen in recent years, with its broad dramatic strokes and attention to musical detail. There’s fire, beauty, humour and –... — BBC Music Magazine, December 2019, 5 out of 5 stars More…

Dudley: How the Tide Rushes In

Dudley: Love of My Life

Dudley: Where the Land Meets the Sea

Dudley: A Seam of Ironstone

Dudley: Luck of the Devil

Dudley: I Wish We Could Stay Like This Forever

Dudley: You Have a Son

Dudley: Ice in the Morning

Dudley: All the Kingdoms of the World

Dudley: Never Have, Never Will

Dudley: You Appear to Have Won

Dudley: Has It Come Too Late?

Dudley: The Happiest of Men

Dudley: The Coming of the Shadow of Death

Dudley: The Passing of the Tides

Dudley: Justice of the Peace

Dudley: What We Feel Is True

Dudley: Into the Darkness

Dudley: We Can Never Be Together

Dudley: Born Under a Black Moon

Dudley: Grieve for the Departed

Dudley: I Once Tasted Heaven

Dudley: Ask Me Nothing

Dudley: The Smallest Piece of My Heart

Dudley: March to the Scaffold

Dudley: A Moment of Bliss

Dudley: Before the City Wakes

Dudley: It Will Always Be Ross

Dudley: The Memory of Elizabeth

Dudley: The Merits of the Deal

Dudley: About to Fall

Music from all 5 seasons of the smash-hit BBC prime-time period drama - Ahead of the release of the highly anticipated fifth and final season of Poldark—one of the biggest TV shows in the UK—Sony Classical is pleased to release a breathtaking x3 CD collection of the music from all 5 seasons. Previous seasons of Poldark have reached viewing figures of almost 10 million. This gorgeous collection follows the success of the music from the first season of the critically acclaimed series which has sold more than 11,000 copies in the UK. Poldark actress and singer Eleanor Tomlinson makes an appearance in this stunning collection. In 2018, Tomlinson’s debut album Tales From Home, produced by Anne Dudley, peaked at number 14 on the Official Album Charts. In 2017, Dudley’s score for Poldark was nominated for a BAFTA TV award in the Best Original Music category. Anne Dudley is an internationally acclaimed Oscar, Grammy, BAFTA and BRIT award winning composer. A graduate of the renowned Royal College of Music, Dudley has since scored the music to critically acclaimed films and television shows including Buster (1988), The Full Monty (1997), The 10th Kingdom (2000) and Les Misérables (2012). In October 2014, Dudley was presented with a Gold Badge BASCA award in recognition of her contribution to music. This prestigious award was followed by an Ivor Novello Award in May 2017 for her outstanding contribution to British music.

Anne Dudley’s is some of the very best music written for the small screen in recent years, with its broad dramatic strokes and attention to musical detail. There’s fire, beauty, humour and – in the original songs and instrumentation – an air of authenticity. The Chamber Orchestra of London, again, do a marvellous job.