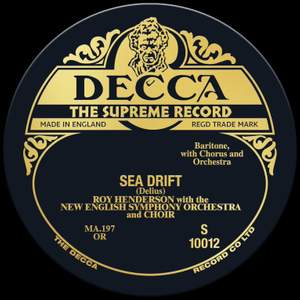 Recorded on May 29th 1929 at the Chenil Galleries in Chelsea, Decca’s first release was issued to coincide with the annual Delius Festival in July 1929. As Andrew Stewart notes in the forthcoming book – Decca – The Supreme Record Company, Gramophone ran a double-page advert in its August edition that year to announce that the ‘Decca Record’ was “now ready”. Roy Henderson’s recording of Delius’s Sea Drift stood as the new company’s classical appetisers. Gramophone’s founder, Compton Mackenzie, in his editorial for August 1929, congratulated “the Decca Company on their first bulletin, which provides an exceptionally well-chosen list”. Roy Henderson’s Sea Drift received special mention.

Recorded by baritone Roy Henderson, the 24-minute piece was Frederick Delius’ setting of Walt Whitman’s poetry to music, creating a shifting, gentle piece, that has always remained a firm favourite of fans of the composer.

With the latest technology at Abbey Road, we present this historic recording to you twice: a ‘needle drop’ flat transfer of the original 1929 recording on the A sides of the 3 discs, and then a cleaned up as much as possible version on the B sides. Both sides will be available to you digitally on a download card. Sea Drift is housed in a beautiful, gold and black embossed 10” circular tin, which replicates the majesty of that early label – a bust of Beethoven presiding over the bold claim ‘THE SUPREME RECORD’. Each set has a numbered fact sheet, and the records themselves are protected by die cut foam discs. 90 years later, Sea Drift is a perfect souvenir for the label’s special birthday. Strictly limited, arriving to coincide with the special celebratory 400-page book for Decca and the label’s return to its ‘Lost Studio’, it is a special product to cherish.