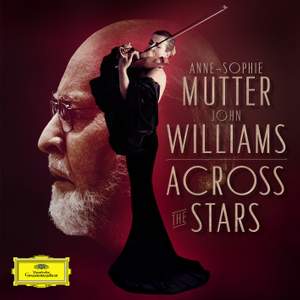 John Williams and Anne-Sophie Mutter - Across The Stars - Vinyl Edition

You can hear that Mutter really believes in this music as she puts her heart and soul into the performances, many themes taking on a hitherto unimagined intensity under her bow…Williams’s melodic... — BBC Music Magazine, December 2019, 5 out of 5 stars More…

Williams, John: Donnybrook Fair (from Far and Away)

Williams, John: Sayuri's Theme (from Memoirs of a Geisha)

Williams, John: The Duel (from The Adventures of Tintin: The Secret of the Unicorn)

Williams, John: Nice to Be Around (from Cinderella Liberty)

The violinist talks to James about her new album of music by John Williams, featuring a selection of movie themes specially reworked for violin and orchestra, conducted by the composer himself.

In the midst of his work on Star Wars’ Final Episode IX John Williams has created and conducted a complete album with Anne-Sophie Mutter and in mutual admiration. It presents his personal selection of iconic themes as well as rediscovered gems from more than 40 years of his music for film.

The music ranges from Star Wars motifs (“Luke and Leia” from Return of the Jedi) to more recent pieces (“Hedwig’s Theme” from Harry Potter) Two themes from Williams’ Oscar-winning Schindler’s List score (the main theme and “Remembrances”) are also featured. A few more surprising choices include new versions of themes from Cinderella Liberty and Dracula, originally written in the 1970s and rarely performed since then.

You can hear that Mutter really believes in this music as she puts her heart and soul into the performances, many themes taking on a hitherto unimagined intensity under her bow…Williams’s melodic gifts are well know and oft-celebrated, but hearing these pieces reimagined by a composer free of the constraints of film frames and time-codes is not just a thrill, it’s often revelatory.

Even if the 12 tracks of Across the Stars work on the senses like consecutive mouthfuls of Turkish delight, there always remains her emotional throb, sweet pianissimos, and god-like technique...Mutter and Williams are especially winning in contemplative, romantic mode, although the scary shivers from the 1979 Dracula earn their place too.