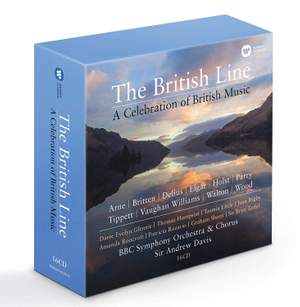 The British Line: A Celebration of British Music

Who better to chart these musical waters than the BBC Symphony Orchestra and Andrew Davis? And what better bonus than their 1994 Last Night of the proms with Bryn Terfel and Evelyn Glennie? — BBC Music Magazine, October 2019 More…

Delius: The Walk to the Paradise Garden

Tippett: Fantasia Concertante on a Theme of Corelli

In 1991, Hamburg-based record label Teldec Classics embarked on a fruitful partnership with Sir Andrew Davis and the BBC Symphony Orchestra. “The British Line” was soon to become an essential series of critically acclaimed digital recordings of major works alongside some lesser-known gems by some of Britain’s most celebrated composers. The series – collected here for the first time – features guest soloists including Tasmin Little, Thomas Hampson and Amanda Roocroft. The set includes bonus disc – Last Night of The Proms: The 100th Season – recorded live in concert in 1994 and featuring star soloists Dame Evelyn Glennie and Sir Bryn Terfel.

“These are four of the best Elgar performances on disc available. First, the recording is superb, with near-perfect balance and a really natural sound. Second, the playing of the BBC Symphony Orchestra is first rate. Andrew Davis's conducting of all four works is inspired” – Gramophone

“Davis has the key to this [Vaughan Williams] symphony’s combination of mystery, menace and qualified optimism” – The Sunday Telegraph

“With sumptuous sound, this is easily the best "modern" version [of Vaughan Williams’ Symphony No. 6] in the catalogue” – Gramophone

“An exceptionally insightful account of the [Enigma] Variations” – Gramophone

Who better to chart these musical waters than the BBC Symphony Orchestra and Andrew Davis? And what better bonus than their 1994 Last Night of the proms with Bryn Terfel and Evelyn Glennie?

Davis’s finest quality is his ability to draw you in without too much point-making. His musical judgement is impeccable, and in a work like Elgar’s Symphony No 2 he has the ability to draw a tear or two as well. The BBC SO’s playing is excellent and the recordings are superb. As British music ‘starter packs’ go, you could hardly do better.