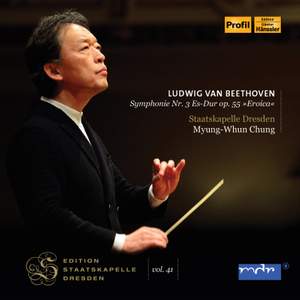 The appointment of a Principal Guest Conductor with effect from the 2012/2013 season was a novelty in the long history of the Dresden Staatskapelle and bears testimony to the close relationship between Myung-Whun Chung and the orchestra.

Since November 2001 the South Korean maestro has repeatedly stood at the head of the Staatskapelle during symphony concerts at the Semperoper; in the orchestra pit he has directed a premiere series of Verdi's Don Carlos and he has joined the Staatskapelle on tours of Europa, the USA and Asia.

Furthermore, he has frequently performed together with members of the Staatskapelle on the chamber music podium. At the 2013 Salzburg Easter Festival, for instance, he assumed the dual role of conductor and pianist. During the course of his Dresden Mahler cycle Chung has so far directed the First, Second, Fourth, Sixth and Ninth Symphonies, to be followed by the Fifth in the 2016/2017 season.