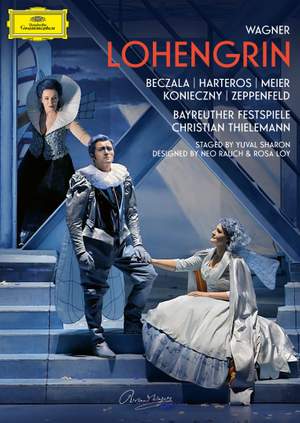 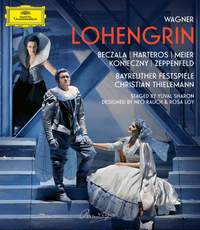 After Tristan und Isolde (2016), Parsifal (2017) and Die Meistersinger von Nürnberg (2018) this is the fourth installment of the exclusive, multiyear partnership between Deutsche Grammophon and the Bayreuth Festival, in which the Yellow Label is the exclusive audiovisual partner of the mythical Wagner festival, releasing each edition's new production on DVD/Blu-ray. This year, we are proud to release on DVD/Blu-ray the celebrated production of Lohengrin which was premiered on 25 July 2018, featuring an illustrious cast including Piotr Beczala and Anja Harteros in their house debuts, as well as the acclaimed return of Waltraud Meier to the Bayreuth Festival. The New York Times praised Piotr Beczala’s Lohengrin as “outstanding”, Anja Harteros [making] her impressive Bayreuth debut” as Elsa, and Ortrud “played with dominant presence by the incomparable Waltraud Meier”. The distinguished artists Neo Rauch and Rosa Loy created “breathtaking visuals”, and the whole performance was guided with “enthralling musicality” by conductor Christian Thielemann.

Harteros as Elsa responds with singing of considerable lyric beauty, her tonal response generous and well matched to the music…Beczała’s Lohengrin provides glorious singing from start to finish marked by an ethereality of tone and perfect phrasing…From his unhurried, almost timeless unfolding of the first-act prelude onwards, Thielemann’s approach is masterly. Bayreuth’s orchestra supplies exceptional richness and depth of tone, and its equally fabled chorus sings with absolute precision and focus

Christian Thielemann conducts a luxurious reading of the opera and the cast is to match. Piotr Beczała’s Lohengrin and Anja Harteros’ Elsa are equal in pure and golden tone and look a dream. Waltraud Meier still has surprising reserves of power at the scything top of her voice as Ortrud. Thomas Konieczny’s Telramund is baleful, and Georg Zeppenfeld’s Heinrich optimum casting.