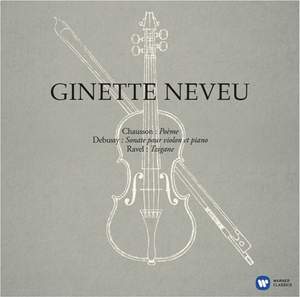 2019 marks the centenary of Ginette Neveu’s birth. Newly remastered in 24bit/96kHz from the best sources available. French violinist Ginette Neveu studied with George Enescu and Carl Flesch and rapidly built an international carrer and reputation. She died aged just 30 with her brother Jean Neveu in a plane which tragically crashed in the Azores in October 1949. The present LP is the reissue of a disc released posthumously in 1957 and comprising recordings made in 1946 and 1948.

“Her playing was superbly vigorous and passionate, and made the impression that its great qualities, such as eloquent phrasing and an apparently limitless range and variety of tone, came from the only true source – an identity with the music and with her instrument.” The Observer, 1945