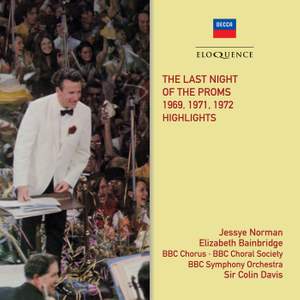 trad.: God Save The Queen

Hail, All Hail to the Queen

Walton: A Song for the Lord Mayor's Table

trad.: God Save The Queen

Compiled together for the first time, historic recordings of the grand finale to the world’s greatest music festival.

In 1969 Philips captured the unique atmosphere of the Last Night of the Proms. Master of ceremonies was Sir Colin Davis, who had become chief conductor of the BBC Symphony Orchestra two years earlier. During the 1960s he had also begun an association with the Dutch label that quickly won critical acclaim for his assured handling of choirs, heard to advantage in a 1966 BBCSO recording of Handel’s Messiah, his genial and authoritative way with English music from Elgar to Tippett, and his passionate conviction and dedication to the music of Hector Berlioz.

All these qualities can be enjoyed in this anthology. The excerpts selected by Philips from the 1969 Last Night began with Cockaigne – perhaps the best introduction to the music of Elgar for its brilliant orchestration as well as its grandeur in evoking the spirit of London – and continued with the concert’s concluding ritual of Pomp and Circumstance, Rule Britannia, Jerusalem and the National Anthem.

The album scored a hit – Davis did not share the ebullient showmanship of his predecessor at the helm of the Last Night, Sir Malcolm Sargent, and yet he brought to the occasion an authority of his own – and so Philips recorded a sequel of excerpts from both the 1971 and 1972 occasions. A special highlight is Jessye Norman in her vocal prime singing two of Wagner’s Wesendonck Lieder. In fact Philips also worked in some of the 1969 material for the patriotic items; this Eloquence reissue presents both original albums complete and newly remastered from the analogue sources.

‘The recording is remarkably successful, capturing the occasion with realism … I hugely enjoyed this record.’ Gramophone, November 1969

‘A thrilling live recording … For a few moments even an overseas realist is hypnotized into believing that Britannia really does still rule the waves … Even the sourest Anglophobe can't possibly remain unmoved.’ High Fidelity, October 1971