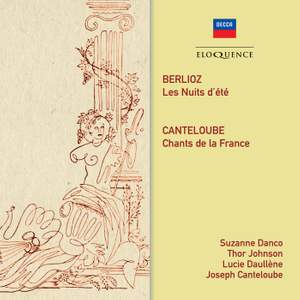 Lucie Daullène’s Snow White soprano has a gurgling innocence in the Canteloube, and Suzanne Danco in the first complete recording of Les nuits, her voice quivering and slivery, captures its languor. — BBC Music Magazine, December 2019, More…

Snow White sings Canteloube, accompanied by the composer: a rare and newly remastered album, transferred to CD on Decca, from the original master tapes, for the first time.

As R.J. Stove outlines in a new essay for this important Eloquence release, Lucie Daullène (b.1931) was nearer 19 than (as the legend has it) 15 years old in 1949-50 when she recorded an album of ‘Chants de France’ for L’Oiseau-Lyre. Her voice, all the same, is so light, fresh and uncoloured by finesse that one may readily hear why Canteloube thought she was ideal. ‘That’s how French folk songs should be sung,’ he once wrote. Though Daullène made only one more classical recording, she later achieved a measure of fame (now named Dolène) as the voice of Disney’s heroine Snow White in the dubbed French version of the movie. At the piano, the septuagenarian Canteloube tosses off scales, arpeggios and glissandi with a panache enviable by many players one-third of his age. He had gathered the songs themselves from Brittany to Corsica and many points in between, and none of them reappear in the more familiar Chants d’Auvergne, even though Daullène herself was a native of the region, making this new release all the more appealing to anyone already captivated by Canteloube.

The ‘bonus’ here is more familiar, but still undervalued: the first complete recording of Les Nuits d’été, made in 1953 at a time when Berlioz was still known for little more than the Symphonie fantastique, even in France. It was sung by the Belgian soprano Suzanne Danco with a natural linguistic ease, and the technical qualities so prized the composer Luigi Dallapiccola: ‘control, breathing, technique, and intonation … balanced so perfectly that one cannot even perceive them as separate’. Danco’s interpretation remains a landmark in the cycle’s discography.

‘A beautiful performance of some ravishing music. Danco has never sounded better on records, and Johnson understands the idiom.’ Gramophone, September 1951 (Berlioz)

‘[Lucie Daullène] sings with the same precision of style [as Madeleine Grey] and with much the same kind of never-never impersonality that communicates so very personally across the spaces and across the years. The

sound is actually that of a not-large room; but when the music begins, the walls melt into field and hills, the ceiling becomes sky … Very highly recommended.’ High Fidelity, June 1956 (Canteloube)

Lucie Daullène’s Snow White soprano has a gurgling innocence in the Canteloube, and Suzanne Danco in the first complete recording of Les nuits, her voice quivering and slivery, captures its languor.