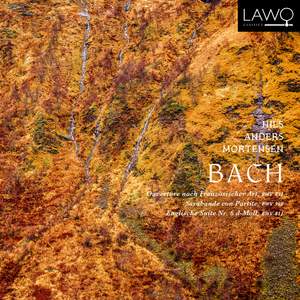 the English Suite’s prelude is fantasy-like and a bit mysterious, with the mood enhanced in a slightly Romantic style by Mortensen. The Gavotte is extremely French, with a nod towards the folk... — Fanfare, January/February 2020 More…

One thing on which many agree is that Bach was doubtless the greatest composer of them all. Schumann noted in his diary that "Johann Sebastian Bach has done everything completely", and in Mahler's words "In Bach all the vital cells of music are united as the world is in God; there has never been any polyphony greater than this."

Bach's works are universal and essentially independent of the instrument the performer is playing. But the use of a modern grand piano is a challenge and can require an adaptation of resources and ideas. The Overture in the French Style, BWV 831, the Sixth English Suite, BWV 811, and the lesser known Sarabande con partite, BWV 990 are three works in which the original instrument with two or three manuals influences the composition to a considerable extent. Pianist Nils Anders Mortensen uses various approaches to the music, with a nod at times to the historical instruments, or an affirmation of the modern grand piano's inherent possibilities, while at other times he plays with different styles.

The Overture in the French Style represents the culmination of Bach's encounter with French music and captures the most essential elements of French harmony, rhythm, ornamentation and form. The Sarabande variations are appealing and uncomplicated. The English Suite in D minor (with the notation in the score "Written for the English", but not composed in the English style) has a marvellously monumental prelude before the French dance movements.

With his critically acclaimed recordings and his soloist appearances with the principal Norwegian orchestras, Nils Anders Mortensen has established himself as one of Norway's leading pianists. Employed as state musician in Finnmark County, he is also active as a freelance artist. This is Mortensen's third solo album on the LAWO Classics label. In addition, he has recorded eight albums with mezzo-soprano Marianne Beate Kielland, and two duo releases with double bassist Knut Erik Sundquist and violinist Arvid Engegård, respectively.

the English Suite’s prelude is fantasy-like and a bit mysterious, with the mood enhanced in a slightly Romantic style by Mortensen. The Gavotte is extremely French, with a nod towards the folk style. The ornaments here roll right along as rapid figurations, while in the Gigue
one has a bit of rather gnarly counterpoint. In the Overture, of course, one finds a similar mood.