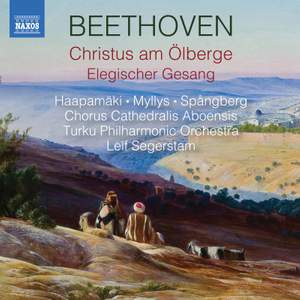 Segerstam’s sure pacing ensures that this performance never flags, while ensuring room to breathe in poetic moments…Jussi Myllys is an admirably clear-voiced Jesus, and Hanna-Leena Haapämaki... — BBC Music Magazine, September 2019, 3 out of 5 stars More…

Ludwig van Beethoven’s only oratorio Christus am Olberge (‘Christ on the Mount of Olives’) portrays Jesus’ emotional struggles in the garden of Gethsemane before being seized by soldiers and taken for crucifixion. The work has an Italianate form with recitatives, arias and choruses, and its operatic attributes show Christ as a very human figure, a dramatic precursor to the sufferings of Florestan in Beethoven’s Fidelio. The tender and beautiful Elegischer Gesang is a memorial to the young wife of one of Beethoven’s close friends. Chorus Cathedralis Aboensis has specialized in large scale choral works since the choir’s inception in 1982. Virtually the entire canon of works for choir and orchestra are in the CCA’s repertoire: it has performed requiems by Verdi, Mozart, Faure and Part, as well as Bach’s Passions and Brahms’ Ein deutsches Requiem.

Segerstam’s sure pacing ensures that this performance never flags, while ensuring room to breathe in poetic moments…Jussi Myllys is an admirably clear-voiced Jesus, and Hanna-Leena Haapämaki conveys the Seraph’s coloratura with suitable aplomb, ably supported by the Turku Philharmonic Orchestra.

Conductor Leif Segerstam secures first-rate performances from both the chorus and orchestra. The recording is excellent, with a warm and resonant acoustic paired with a superb balance of soloists, chorus, and orchestra—no mean feat.

In the demanding title-role, Myllys suffers little by comparison with Plácido Domingo…His baritonal reach brings grit and authority to those recitative pages of less compelling invention…Segerstam doesn’t miss a trick when it comes to Beethoven’s defiantly personal fusion of politics, religion and music.