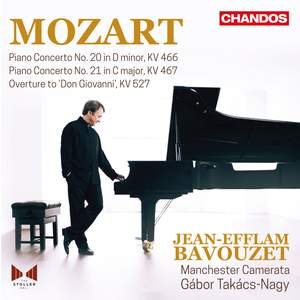 This is altogether a really fine performance…Bavouzet uses the ubiquitous Beethoven cadenzas for K466, while for its C major companion-piece K467 he opts for the examples by Friedrich Gulda,... — BBC Music Magazine, August 2019, 5 out of 5 stars More…

Jean-Efflam Bavouzet’s first three volumes of Mozart concertos with the Manchester Camerata and Gábor Takács-Nagy have been received with widespread acclaim, and so it’s with some excitement that we release the keenly anticipated fourth instalment in the series. Composed within just one month in early 1785, these two concertos are among the most popular of all of Mozart’s piano concertos. No. 20, K 466, was his first concerto in a minor key, and it’s dark and stormy nature contrasts the light and sunny feeling of concerto no.21. As with so many of his piano concertos, both works were composed for the Vienna concert series, and given their premiere performances with Mozart at the keyboard. The two concertos are interspersed on this recording with a vivid performance of the Don Giovanni Overture, which further demonstrates the exemplary playing of the Manchester Camerata.

This is altogether a really fine performance…Bavouzet uses the ubiquitous Beethoven cadenzas for K466, while for its C major companion-piece K467 he opts for the examples by Friedrich Gulda, whose recording of the work has been a seminal influence on him…Emulating Gulda, Bavouzet makes the melody float freely while maintaining the throbbing rhythm in the left hand…Takács-Nagy and the Manchester Camerata are thoroughly in tune with Bavouzet, and the recording is first-rate.

Bavouzet and the Manchester Camerata are ideally poised in the fast music, with the conversational interplay between piano and woodwinds displaying the naturalness that is an evident hallmark of this cycle. This series of discs is shaping up to be a serious front-runner in a cycle of works that has never wanted for fine recordings.

Bavouzet once again gives performances of a sheen and brilliance know to only the finest Mozart pianists. Impeccable in technique and musicianship (an indivisible union) his delectably light-fingered dexterity never descends.

For modern-instrument Mozart, I’m likely to prefer this in future even to my previous favourites.

Unsurprisingly this recording blew me away...Bavouzet invests Beethoven’s cadenzas with a fraught, disturbed character...one has to stop oneself from standing up and applauding.

Takacs-Nagy’s Manchester musicians lavish on the orchestral parts a dreamy quality of rapture, emulated by Bavouzet in homage to the late Friedrich Gulda, whose cadenzas he uses...The interplay between the pianist and the woodwind soloists is especially rewarding in these compelling performances.

Bavouzet prefers to peck at notes rather than stroke them, which may not bring playing of huge variety. However, you can’t fault him for crystal clarity, ensemble spirit and the springing of pleasant surprises.

[Bavouzet’s] approach to the former is appropriately sunny and happy. His delicate sense of rubato in the slow movement creates an improvisatory mood without undue indulgence, and the spring-heeled tempo in the finale movement is delightful.