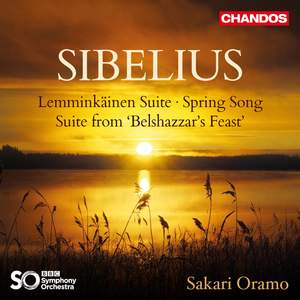 The Lemminkäinen Suite has tended to be viewed as an important staging post on [Sibelius’s path to the symphony]…What Sakari Oramo shows is that it’s a marvellous achievement in its own right,... — BBC Music Magazine, August 2019, 5 out of 5 stars More…

No. 1, Lemminkäinen and the Maidens of the Island

No. 3, Lemminkäinen in Tuonela

Chief conductor of the BBC Symphony Orchestra since 2013, Finnish conductor Sakari Oramo has a special affinity with the music of his compatriot Sibelius which this recording admirably demonstrates. Sibelius’ ever-popular ‘Lemminkäinen Suite’ is coupled here with ‘Spring Song’, and the lesser-known Suite from ‘Belshazzar’s Feast’. Sibelius composed the ‘Lemminkäinen Suite’ (also called the Four Legends, or Four Legends from the Kalevala), Op. 22, in the 1890s. Originally conceived as a mythological opera, Veneen luominen (The Building of the Boat), the suite is based on the character Lemminkäinen from the Finnish epic, the Kalevala. Sibelius’ music for ‘Belshazzar’s Feast’ was originally composed as incidental music for a play (by Hjalmar Procopé), in 1906. First performed in the Swedish Theatre in Helsinki in November of that year, conducted by the composer. The following year, Sibelius extracted four of the eight movements to form the more widely known orchestral suite we hear in this recording.

The Lemminkäinen Suite has tended to be viewed as an important staging post on [Sibelius’s path to the symphony]…What Sakari Oramo shows is that it’s a marvellous achievement in its own right, and as such not quite like anything else…Superbly recorded, this is a Lemminkäinen Suite to treasure.

Sibelius in three different but vital modes - linguistic cornerstones, even - on which the BBC Symphony's chief conductor brings deep insights to bear. It is thrilling to hear the rarity Spring Song played with full acknowledgement that this is rather more than a seasonal ditty [...] We once again come close to the heart of Sibelius in an unlikely place.

This is Oramo’s first recording of Sibelius with the BBC SO, and its bracing string textures and wind solos bring the rich music of the Lemminkainen legends vividly to life.

Thus, from Oramo, ‘Lemminkäinen and the Maidens of Saari’ is given a pliable outing, from languishing to impetuous, always scenic, becoming ardent, a story to be told – gripping music