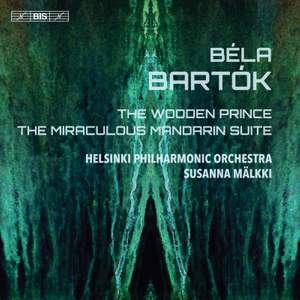 [The Wooden Prince’s] essential warmth, rooted in folk-like melodies (but never folksiness) , comes across well here in Susanna Mälkki’s recording, since with a feeling for the score’s rubato... — BBC Music Magazine, September 2019, 4 out of 5 stars More…

II. First Dance. Dance of the Princess in the Forest

III. The Prince Falls in Love

IV. Towards the Castle of the Princess - V. Second Dance. Dance of the Trees

VI. The Prince Continues on His Way - VII. Third Dance. Dance of the Waves

VIII. The Prince Has an Idea

IX. The Princess Is Curious - X. Fourth Dance. Dance of the Princess with the Wooden Prince

XII. The Prince Is Restored

XVII. Seventh Dance - XVIII. The Despair of the Princess

I. Introduction - II. The 3 Tramps and the Girl

VI. The Girl Begins to Dance for the Mandarin

VII. The Mandarin Chases the Girl

The Wooden Prince and The Miraculous Mandarin are – together with the earlier opera Bluebeard’s Castle – the only stage works by Béla Bartók. They stand apart from the more abstract and often more explicitly folk-related character of the music that we primarily associate with the composer. They are nevertheless major achievements that in different ways highlight Bartók’s imaginative use of the modern orchestra. Set in an enchanted forest, The Wooden Prince is based on a fairytale-like libretto featuring a prince and princess. The two are subjected to various trials, but at the end of the ballet they are allowed to come together and live – we assume – happily ever after. In stark contrast, The Miraculous Mandarin takes place in an urban brothel where three robbers force a girl to seduce men so that they can overpower and kill them. The subject-matter and the erotic qualities of much of the music caused a scandal at the première in 1926, and for a long time the score was primarily performed in the shorter concert version heard on the present release, the first from the team of the Helsinki Philharmonic Orchestra and Susanna Mälkki, the orchestra’s chief conductor since 2016.

[The Wooden Prince’s] essential warmth, rooted in folk-like melodies (but never folksiness) , comes across well here in Susanna Mälkki’s recording, since with a feeling for the score’s rubato she completely commands a rich-sounding Helsinki Philharmonic; the entire orchestra seems to flex and breathe with the music.

Mälkki’s reading has much to offer. She elicits brilliant, rhythmically disciplined playing from the Helsinki Philharmonic…[and] is also a fine storyteller who brings the characters vividly to life…We’ve had some superb accounts of this ballet over the years…and Mälkki stands with the best of them. Indeed, given the excellence of BIS’s engineering, hers is easily a prime recommendation.

it’s good to report that Susanna Mälkki’s quick-witted Helsinki Philharmonic performance is outstanding, and sumptuously engineered to boot. Mälkki’s coupling is the suite from The Miraculous Mandarin, played with plenty of ferocity and abandon.

Mälkki's meticulously prepared conception keeps the action nicely on the boil and has plenty of personality, incident and atmosphere to commend it.