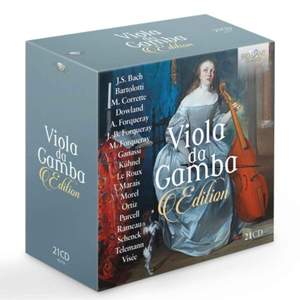 A tribute to the Viola da Gamba, which for a long period of time was the most important and popular string instrument in use. Its Golden Age was the Renaissance and Early Baroque, it was succeeded in the 18th century by the stronger violoncello.

• The Viola da Gamba is an instrument with six strings, played while held between the knees (Gamba is Italian for knee). Its sweet, slightly nasal and rich sound has a unique speaking quality, able to express all human emotions, but particularly those of a melancholy or sad nature.

• This Edition offers an extensive survey of music written for Viola da Gamba, by composers who were often virtuosos on the instrument: Marias, Kühnel, the Forqueray family, Schenck, Leroux, Ortiz, Ganassi, Corrette, Rameau, Telemann, Bach and Purcell. The set begins with probably the most beloved and moving work for Viola da Gamba Consort: the Lachrimae (Tears) by John Dowland.

• A worthy tribute to a nearly forgotten instrument, which gained a renewed public interest by the successful film about Marin Marais: “Tous les matins du monde”.