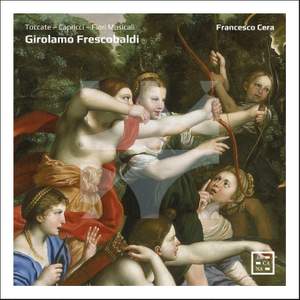 Girolamo Frescobaldi is one of the most extraordinary figures in the history of music for harpsichord and organ, and had an enormous influence on other composers up until Bach. His brilliant toccatas reveal an inner world that fascinates today's listener. Frescobaldi's inspiration was born at the court of Ferrara and reached maturity in Rome, where the composer found himself among the major artists of the time who were actively creating a new artistic language. The 7-CD box set includes the four collections by Frescobaldi

which, due to their exceptional innovative strength, have left the greatest mark on the history of music for the keyboard. A pupil of Leonhardt and Tagliavini, Francesco Cera is today recognized as one of the leading specialists in Frescobaldi, whose music he has helped to disseminate through concerts and master classes in Europe and the United States. Part of the music was recorded in the excellent acoustics of the Sala della Vigna in the Delizia di Belriguardo, the summer residence of the Este dukes, where the very young Frescobaldi was often present. Cera has chosen nine priceless instruments, including the Guglielmi organ of 1615 in the church of Santa Maria in Vallicella in Rome, and a copy of the harpsichord by Nicolò Albana, Naples 1584. The art historian Denis Grenier has been entrusted with the task of illustrating seven works of art that testify to the link between the music of Frescobaldi and the art in Rome of his time.