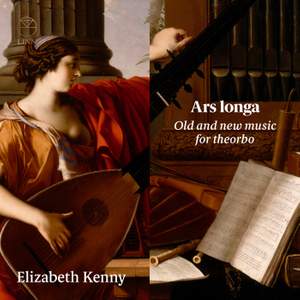 Kenny lacks neither extensive playing experience in chamber, orchestral or operatic contexts nor a brilliant musical imagination. She brings both to bear on these performances of ‘old and new... — Gramophone Magazine, August 2019 More…

MacMillan: Since It Was the Day of Preparation …: I. Motet 1

Oliver, B: Extending from the inside

The theorbo-player and lutenist talks to David about her solo album Ars longa, released on Linn last month, which includes music by Kapsberger, Piccinini and Robert de Visée as well as new commissions from Benjamin Oliver and Nico Muhly.

• The recital takes the listener from the early avant-garde repertoire for the instrument of Kapsperger and Piccinini to the new and imaginative sounds explored by today’s composers.

• Taken from his 2011 work Since it was the day of Preparation … James MacMillan’s motet is a haunting and melancholy piece in which the theorbo acts as an emblem of human fragility and sadness.

• Benjamin Oliver wrote Extending from the inside specifically for Kenny, who relishes the unique challenge of combining elements of funk guitar with Baroque tradition in this premiere recording.

• The second premiere recording is Nico Muhly’s Berceuse, also inspired by Kenny; it exploits the unconventional tuning system and expressive possibilities of the theorbo to powerful effect.

Kenny lacks neither extensive playing experience in chamber, orchestral or operatic contexts nor a brilliant musical imagination. She brings both to bear on these performances of ‘old and new music’…She beautifully combines an expansive orchestral conception with an almost painful improvisatory intimacy. It’s just lovely.

James MacMillan’s devout Motet 1 (from Since it was the day of Preparation), Benjamin Oliver’s rather grittier Extending from the inside and Nico Muhly’s colourful Berceuse, with seven variations, make for excellent contrast and complement. Kenny’s playing is, as usual, sublime.

She frames the premieres with toccatas that sound like improvisations, hypnotic chaconnes that weave around repeated bass lines, and Robert de Visée’s lovely tribute to his fellow Frenchman, Les Sylvains de Mr Couperin.